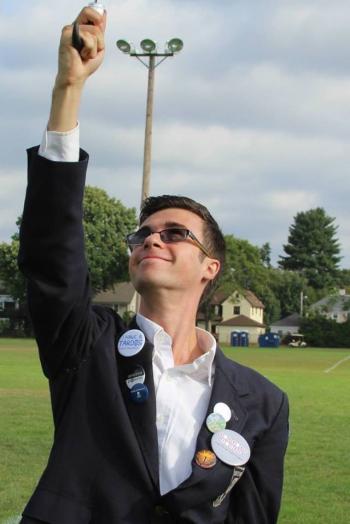 When John was a wee laddie and first heard the song “McNamara’s Band,” he was convinced that those jolly Irishmen were singing about his long-lost great uncle Barnabas, who, according to John’s grandmother “never left home without his flute and a flagon of fun.”  Bent on carrying out the family tradition of musical pomp and merry revelry, John travelled from his hometown of Farmington, Missouri to join the Yale Precision Marching Band, who, he quickly discovered, truly are the finest in the land.

Before he began his job tweeting a whistle and waving his arms (Drum Majoring can make one feel very bird-like sometimes,) John was a faithful mellophone-playing member of the low brass section and served as the band’s Head STUDent Arranger, where he was in charge of creating all those note things the band (usually) needs to make music.  John has also gained notoriety as the first two-term YPMB drum major in thirty years.  Some of his favorite YPMB memories include performing at the Rivalry on Ice hockey game at Madison Square Garden, attack-banding a Bar Mitzvah in Commons, and defeating Hahvahd University Band not with a prop or weapon, but with an epic Uberdance at The Game 2014.  When he’s not conducting the band, you can find John conducting science experiments in KGL where he studies as a Physics and Geoscience major, or playing French Horn in the Yale Concert Band.  He also enjoys hiking, napping, coffee, and hanging out with friends.