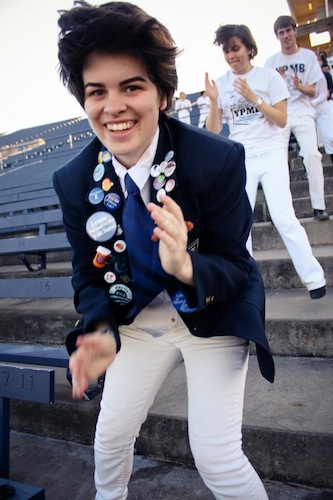 Erin Maher had never seen a football game before she came to Yale. She had, however, received a ukulele as a graduation present (her hands are too small for a guitar), so when her roommate dragged her to YPMB auditions, she signed right up. Since then, Erin has accomplished a number of things, including actually learning how to play that ukulele, puzzling out the basic rules of football, and serving as the YPMB’s Social Chair and Straaaaaangs section leader.
When she’s not engaging in her weekly upper body workout (conducting the YPMB), she can probably be found obsessing over gender construction in pop music (majoring in Women’s, Gender, and Sexuality Studies), making loud noises by hitting things (playing percussion in the Yale Concert Band and the Yale Bands Percussion Group), or throwing herself down mountains at high speeds while strapped to two sticks of plastic (skiing). A proud Seattleite, Erin also spent a substantial chunk of her high school years in Switzerland and the UK, a time she mostly spent trying (and, sadly, failing) to acquire a British accent. She is a huge fan of flannel, Cheezits, parentheticals (can you tell yet?), and the internet.

Erin really likes to talk, so you should definitely come say hi! If you’re not sure which one she is, just look for the really brightly colored hair (sidenote: Erin is always open to suggestions for her next hair color).