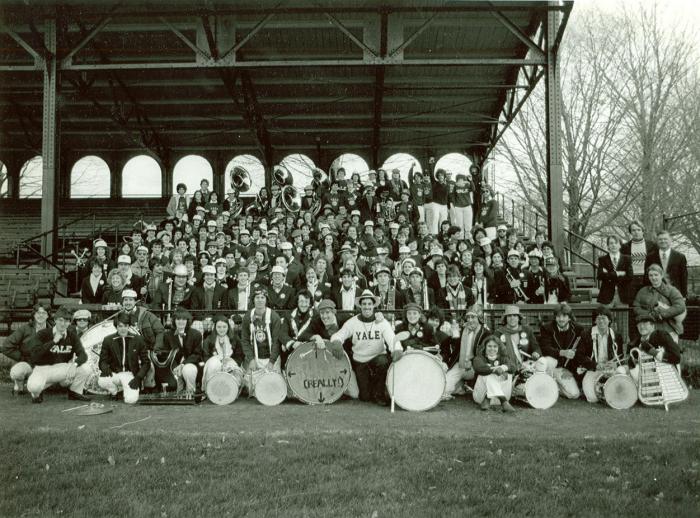 Sarah Zachos:
“The band arrived early at Princeton for the football game and stole one of their big flags from on top of a building. Somehow we thought this was funnier and more clever than the administration did but I don’t recall anyone actually getting into trouble.”

Howard Stovall:
“Sandy Haviland and I did a photojournalism essay on YPMB that appeared in either 1982 or 1983 Banner.”

Stan Jaskiewicz:
“The show I remember most from 81-82 was the opener, when we were effectively on probation. We began with bad classical music, and a script about the ‘new and improved’ YPMB. The announcer then did a play on a current movie about not being able to take it anymore, and welcomed the original YPMB.”

“I remember the school buses racing around the practice field track before dropping us off for our first unmarching rehearsal. Knew I had found the right (dis)organization.”

“Communism show v. Dartmouth, the last Ivy game on one of the major broadcast networks. Beautiful TV shot of the first formation of the band in a hammer and cycle wearing their red shirts as the announcers went to commercial. Good thing too, since in rehearsal it had always looked like a half-eaten apple. Vivid memory of Peter Schmidts (sp?) reading The Communist Manifesto in the back the bus on the way to the practice fields with all the passion his actorly heart could muster. That show also had a double ELI: And remember that Eggheaded Leftist Intellectuals, or E -L-I, will continue to Eliminate Leftover Imperialists, or E-L-I.”