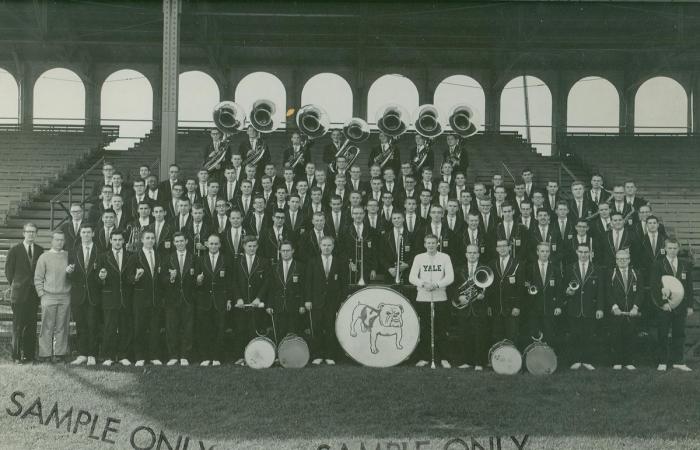 Dennis Upper (excerpted from “Long Story Short”, published by iUniverse, 2007):
“It’s a crisp, cloudless Saturday morning in mid-October, and the Yale Precision Marching Band is doing its final run-through of the halftime show we’re going to perform at today’s Yale-Dartmouth football game. We’re rehearsing our music and practicing formations on the baseball field across the street from the Yale Bowl, and a small crowd of dates, family members, roommates, and assorted hangers-on is watching from the bleachers behind the backstop.

Today, our penultimate formation — we always end the halftime show with a marching Y-A-L-E to the tune of “Down the Field” — spells out W-H-I-T, to honor Yale President A. Whitney Griswold’s tenth year in office, set to a march-time version of “Nice Work If You Can Get It.”

As we begin to make these letters in our final practice, I notice what looks like some confusion and milling around among the players in the front ranks, and it’s only when we’re finally in formation and the crowd starts hooting and hollering that I realize that the guys who were supposed to form the W have conspired to form an S instead.”