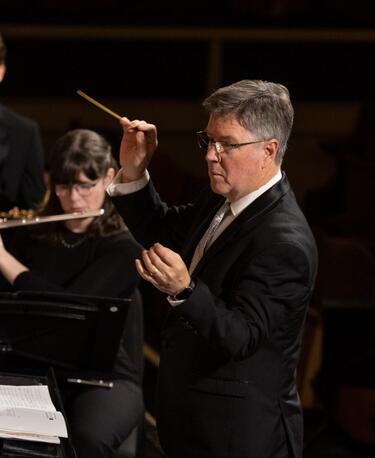 Thomas C. Duffy is Professor (Adjunct) of Music and Director of University Bands at Yale University, where he has worked since 1982. He has established himself as a composer, a conductor, a teacher, an administrator, and a leader. His interests and research range from non-tonal analysis to jazz, from wind band history to creativity and the brain. Under his direction, the Yale Bands have performed at conferences of the College Band Directors National Association and New England College Band Association; for club audiences at NYC’s Village Vanguard and Iridium, Ronnie Scotts’s (London), and the Belmont (Bermuda); performed as part of the inaugural ceremonies for President George H.W. Bush; and concertized in twenty-two countries in the course of nineteen international tours.

Duffy produced a two-year lecture/performance series, Music and the Brain, with the Yale School of Medicine; and, with the Yale School of Nursing, developed a musical intervention to train nursing students to better hear and identify body sounds with the stethoscope. He combined his interests in music and science to create a genre of music for the bilateral conductor - in which a “split-brained conductor” must conduct a different meter in each hand, sharing downbeats. His compositions have introduced a generation of school musicians to aleatory, the integration of spoken/sung words and “body rhythms” with instrumental performance, and the pairing of music with political, social, historical and scientific themes. He has been awarded the Yale Tercentennial Medal for Composition, the Elm/Ivy Award, the Yale School of Music Cultural Leadership Citation and certificates of appreciation by the United States Attorney’s Office for his Yale 4/Peace: Rap for Justice concerts – music programs designed for social impact by using the power of music to deliver a message of peace and justice to impressionable middle and high school students.

From 1996 to 2006, he served as associate, deputy and acting dean of the Yale School of Music. He has served as a member of the Fulbright National Selection Committee, the Tanglewood II Symposium planning committee, the Grammy Foundation Music Educators Award Screening Committee, and completed the MLE program at the Harvard University Institute for Management and Leadership in Education. He has served as president of the Connecticut Composers Inc., the New England College Band Directors Association, and the College Band Directors National Association (CBDNA); editor of the CBDNA Journal; publicity chair for the World Association of Symphonic Bands and Ensembles; and chair of the Connecticut Music Educators Association’s Professional Affairs and Government Relations committees. For nine years, he represented music education in Yale’s Teacher Preparation Program. He is a member of American Bandmasters Association, American Composers Alliance, the Connecticut Academy of Arts and Sciences, Connecticut Composers Incorporated, the Social Science Club, and BMI. Duffy has conducted ensembles all over the world including his conducting of the 2011 NAFME National Honor Band in the Kennedy Center, Washington, D. C.

More information about Dr. Duffy’s compositions and a downloadable photo.