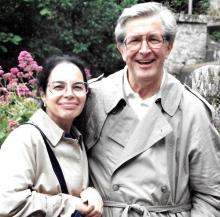 Reunion is a group of Yale alumni who, along with late Yale Law School professor and trumpeter Stanton Wheeler, were early members of the Yale jazz scene in the 1970s. Wheeler continued to play with the YJE until his death in 2007.

Marcia Chambers ‘81 MSL, Senior Research Scholar in the Yale Law School and award-winning author and journalist, was involved in the Yale jazz world even before she married Stan in 1984. Stan and Marcia championed jazz at Yale as heads of Morse College, and hosted official and impromptu jazz gatherings in their home for four decades. Until her death in 2018, Marcia hosted eleven annual Stan Wheeler Memorial Jazz concerts at the Yale Law School. This 12th concert is dedicated to their memories.

The Yale Jazz Ensemble (YJE) is an eighteen-piece big band that performs a wide variety of music, from Yale’s Benny Goodman archive to the most progressive jazz compositions. The Ensemble has performed extensively in the United States and internationally at such noted venues as New York’s Village Vanguard and Iridium jazz clubs, and London’s Ronnie Scott’s. The YJE has performed with or opened for The Mel Lewis Jazz Orchestra, the Toshiko Akiyoshi/Lew Tabackin Big Band, the World Saxophone Quartet, Jane Ira Bloom, Jimmy Owens, and Branford Marsalis.